Since it first opened its doors, Resto-Bar Le Commandant has provided its clients with quality service and food that has been cooked and served by a passionate and dedicated team of house employees. 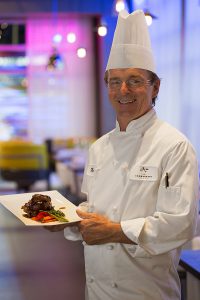 Chef Mario Gagnon has worked at several major restaurants in Eastern Canada including Ottawa and Quebec City and also for the Hilton hotel chain where he worked for over 25 years. He then began leading the kitchen brigade at Resto-Bar Le Commandant after participating in its official opening. “Arriving at a restaurant, starting up from scratch and planning an opening in under a month and a half was one of the biggest professional challenges of my career” says Chef Mario Gagnon.

A lover of gastronomy and helicopters.

Mario Gagnon has been passionate about helicopters since he was very young. “I grew up on the North Shore and when I was young, I was always fascinated when I saw Hydro-Quebec and forest fire helicopters flying overhead” says the Chef. For him, the opportunity to work at a restaurant located in the Complexe Capitale Hélicoptère was a happy crossing of his two passions. The fruit of this pairing is clearly expressed by the helicopter-inspired theme.

The challenge imposed by creating a “wow” effect for the menus also motivated him to delve deeper into the adventure offered by this unique concept. He is driven by working with flavours, colours and textures to create delicious and original offerings. “At Resto-Bar Le Commandant, we work with local and seasonal products. This has allowed us to offer a wide variety if dishes and it also helps encourage our region’s suppliers and producers.”

Mario Gagnon’s preference when it comes to cooking is fish and seafood. As the son of a fisherman, he learned about preparing seafood at an early age.

After just a year in operation, Resto-Bar Le Commandant has met with rousing success from its clients and, according to the Chef, this can be attributed to a few key elements. Chief among them is his team. “Running a restaurant requires team work. The experience of each person is taken into consideration and then highlighted to provide our clients with best dining experience possible. We are lucky to have a young and very motivated team who are eager to showcase their skills. Working here offers them unparalleled joie de vivre” says the chef. 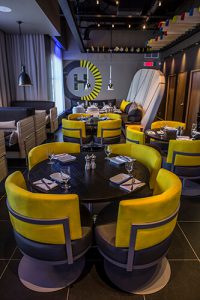 Our clients are always amazed at the quality and variety of dishes we offer. There is something for everyone, regardless of whether its a night out with friends, a family brunch or cocktails with the office. Some of the most popular items on the menu include lobster benedict, bone-in filet mignon and a selection of gourmet pizza.

The restaurant’s unique ambiance and decor also play an important role in it’s success. “As soon as I arrived at the Complexe Capitale Hélicoptère restaurant, I was immediately impressed with the size of the building and its helicopter related decor. It really has a one-of-a-kind aviation ambiance” he says. According to Mario Gagnon, the extraordinary modern decor, the colour selection and the strategic layout of the restaurant are some of the best appreciated elements with their clients.

Expanding the restaurant and the kitchen

Following its positive reception in 2016, Resto-Bar Le Commandant has several projects in store for 2017. In addition to adding new promotions and dishes to the menu, the restaurant and the kitchen will be expanded, allowing them to offer a catering service for events being held in the popular conference rooms of the Complexe Capitale Hélicoptère. And that’s not all… keep in touch with them on social media because other news will be announced shortly! 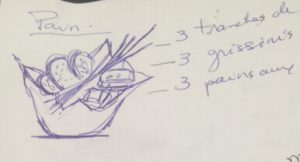 When designing a new dish, Mario Gagnon draws it first and then adds the ingredients so that he can flesh out the final result before cooking.